Best things to see in Florence

Visiting Florence means being engrossed by the rooms at the Pitti Palace and Uffizi Gallery on an extraordinary journey through the works of Raffaello, Botticelli, Rembrandt, Caravaggio and many others. Florence is also the birthplace of Dante Alighieri and the canvas where peerless artists like Michelangelo and Leonardo Da Vinci expressed their genius.

Work on the Gothic cathedral of Santa Maria del Fiore began in 1296 and was completed by Brunelleschi in 1436 with the famous Dome, which was painted inside with frescoes by Vasari and Zuccari. The square bell tower designed by Giotto in 1334 stands on the right-hand side of the Cathedral and is covered in white, green and red marble. The Baptistery of San Giovanni, one of the oldest monuments in Florence (1128), is located opposite the Cathedral and is built in Florentine Romanesque style.

This church in the Gothic-Florentine style was built in the second half of the 12th century. Santa Croce contains several masterpieces: the frescoes by Giotto, the Crucifix by Cimabue and the Cappella dei Pazzi, a chapel built by Brunelleschi. The Basilica is famous throughout the world because some famous people are buried inside it, such as Alfieri, whose tomb was sculpted by Canova.

The interior of this church was completed by Brunelleschi and later, by Michelangelo. The Basilica di San Lorenzo’s façade is still not finished.
There are some works of art inside: the two pulpits built by Donatello when he was already 74 years old, The Biblioteca Medicea Laurenziana and the Tombe Medicee, works by Michelangelo, the Cappella dei Principi chapel with its magnificent decorations in marble and semiprecious stones.

Built in the 13th century according to the wishes of the Dominican monks, the Church’s façade is built in the Gothic-Romanesque style, with white and green marble. mportant works of art inside are the frescoes by Masaccio portraying the Holy Trinity, the Crucifix by Brunelleschi and the one by Giotto.

This church was built with the intention of becoming the people’s grain market, but was immediately used as a place of worship.
14 niches can be seen in the church’s outer walls containing the same number of statues of saints who are patrons of the arts and work "Corporations".

As its name suggests, this splendid Bridge is the oldest in Florence: the first construction already existed before the 11th century, but was destroyed by a flood of the Arno. The bridge was rebuilt in solid stone in 1345. Its banks are still full of goldsmiths’, silversmiths’ and jewelers’ laboratories whose art has been passed down from generation to generation.

The magnificent Piazza della Signoria is a real open-air exhibition: Palazzo Vecchio, with its sixteenth-century hall full of frescoes by Vasari, the Fountain of Neptune by Ammannati, and the copy of Michelangelo’s David all welcome the visitor when he enters the square. On the right-hand of the square there is the Loggia della Signoria that contains some fine statues such as the bronze Perseo by Cellini and il Ratto delle Sabine by Gianbologna.

This palace was built for the banker Luca Pitti halfway through the fifteenth century. After he went bankrupt, the building became the Medici family residence.
The family improved the building, starting with the large courtyard designed by Ammaniti. The Medici collected their Baroque and Renaissance art collections here, which can now be viewed in the Palatina Gallery. The Palace contains other important museums too: the Gallery of Modern Art, the Silver Museum and the Costume Gallery. 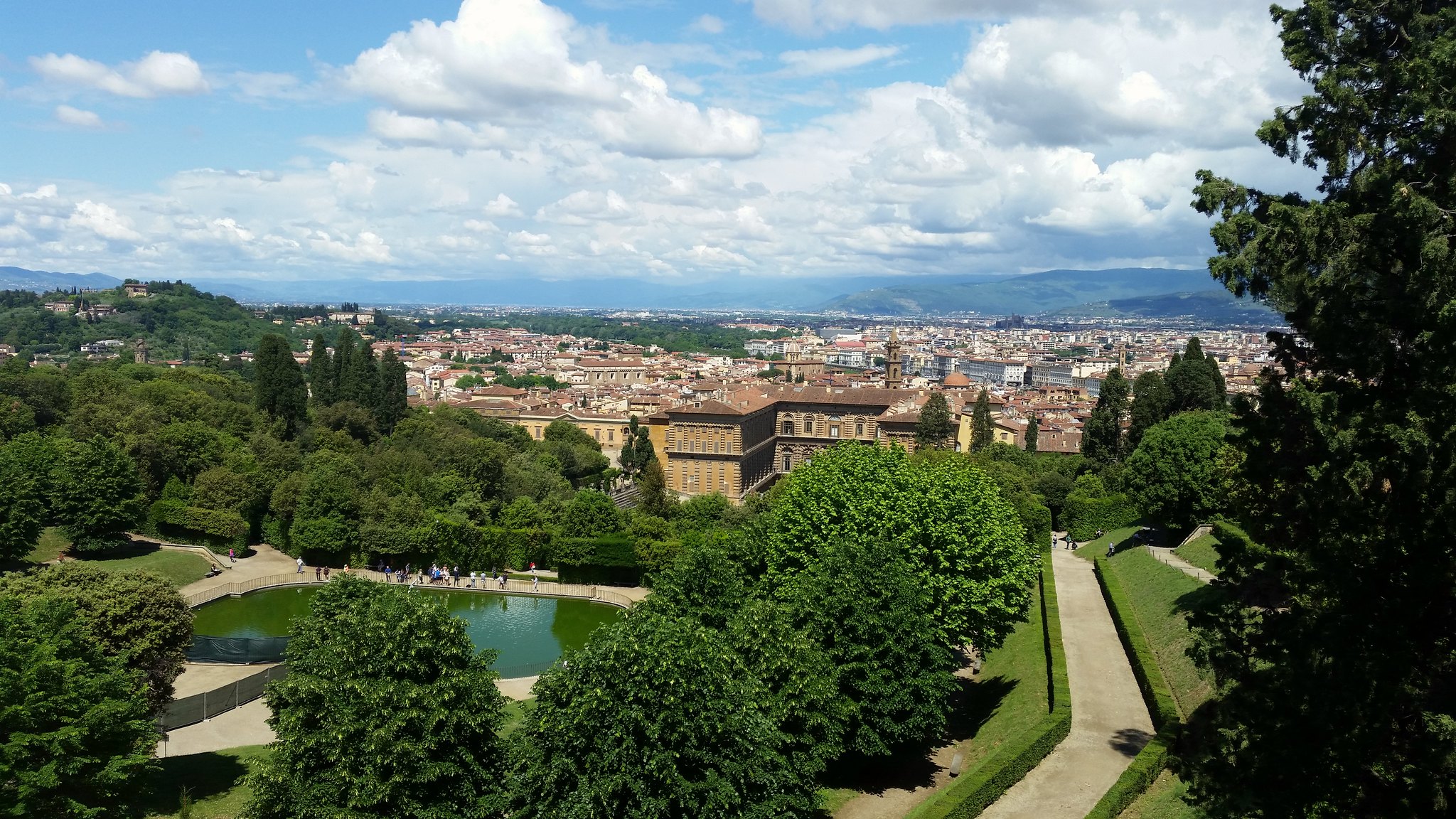 The Boboli Gardens spread out alongside Palazzo Pitti. They were both created on the wishes of the Medici family in 1500.
If we take a walk through these wonderful Renaissance gardens, we can see some charming monuments such as the amphitheater, the Grotta del Buontalenti, and the small island with the statues of the dancing country-folk.

The Central San Lorenzo Market is housed inside a huge iron and glass building that was built in 1874. Even though it is now a tourist attraction, the Market has preserved a part of its charm. On the ground floor there are several delicatessens, selling Florentine and Tuscan delicacies, where it is possible to stop for a bite to eat. On the first floor there are flower stalls and fruit and vegetable stalls where all the local seasonal produce is displayed.

This building was opened in 1445, and was the first orphanage in Europe. A part of the building is still used for this purpose today.
The portico, built by Brunelleschi, is decorated with glazed terracotta spheres that represent new-born children. It is still possible to see the “wheel” in the portico, a turning stone cylinder where mothers placed their unwanted children, who were then turned round to the inside of the building.

The Uffizi Gallery is one of the largest museums in the world, It was built in the mid-sixteenth century, following a project by the architect Giorgio Vasari and still houses some of the most famous works of art by Italian and foreign painters from the 13th to 19th centuries, such as Tiziano, Cimabue, Giotto, Masaccio, Tintoretto, Leonardo, Botticelli, Michelangelo, Piero della Francesca, Raffaello, Caravaggio, Rubens, Rembrandt, Dürer and Goya.

This Gallery was founded in 1784 by the Grand Duke Pietro Leopoldo, who decreed that all the schools of painting should be joined together in a single Academy. One of the most popular museums in Florence, the Gallery houses many sculptures by Michelangelo, including the famous David.

The National Museum, housed in a building that was the city prison dating back to 1200. It contains some of the best sculptures from the Tuscan Renaissance era.Some of the works of art in the Bargella are: the David by Donatello, Mercury by Gianbologna, and the bust of Brutus by Michelangelo.

The collection of artifacts on show in the Museum belonged to the Medici family, especially to Cosimo il Vecchio, and comprises objects from the Etruscan period: terracotta ornaments and sculptures in marble and bronze, including the Chimera di Arezzo and l'Arringatore. The Egyptian section, that was created thanks to the collection from another important family, the Lorena, is not to be missed.

This is an important collection of scientific instruments that are proof of the interest that 13th century Florence had in science. The collection includes sun dials and night-clocks, compasses, microscopes and a series of original instruments made by Galileo Galilei.

This palace was renovated in 1612 by Michelangelo Buonarroti “il giovane”, who decorated all the interior area of the building on his own, as a tribute to his ancestor. It is possible to see some early masterpieces by Michelangelo such as the Madonna della Scala and the Battaglia dei Centauri. 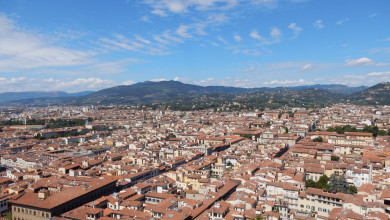 Florence: jewel of Central Italy
Famous throughout the world, heart of the Renaissance, home to fine art and literature, the corners of Florence preserve some of the most beautiful examples of Italian and Western culture such as Michelangelo's David, Brunelleschi's spectacular dome and the ancient Ponte Vecchio.
Itineraries 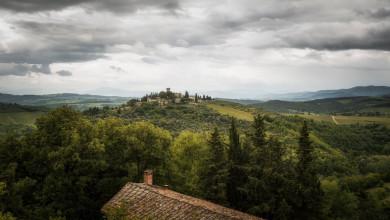 Florence and surroundings
Florence's surroundings are a great way to discover history, relax, have fun and try some of the many specialties offered by Tuscan cuisine. We'd like to suggest three itineraries, three ways to come into contact with the heart of Florence and its surroundings.
Food 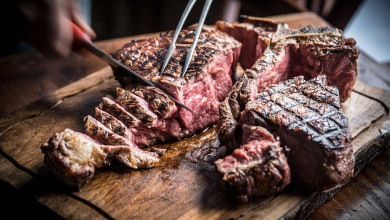 Florence: a journey through tastes
The region that houses the city of Florence boasts one of the most renowned culinary traditions in Italy. Florentine cooking is linked to a tradition of simple dishes prepared with genuine, tasty but plain ingredients, which has recently been reconsidered by the world of more sophisticated cuisine. Cereals, bread, vegetable and oil (which must be extra-virgin) are the basis of many recipes that just have to be tried in one of the many restaurants in Florence.