Milan: the best things to visit 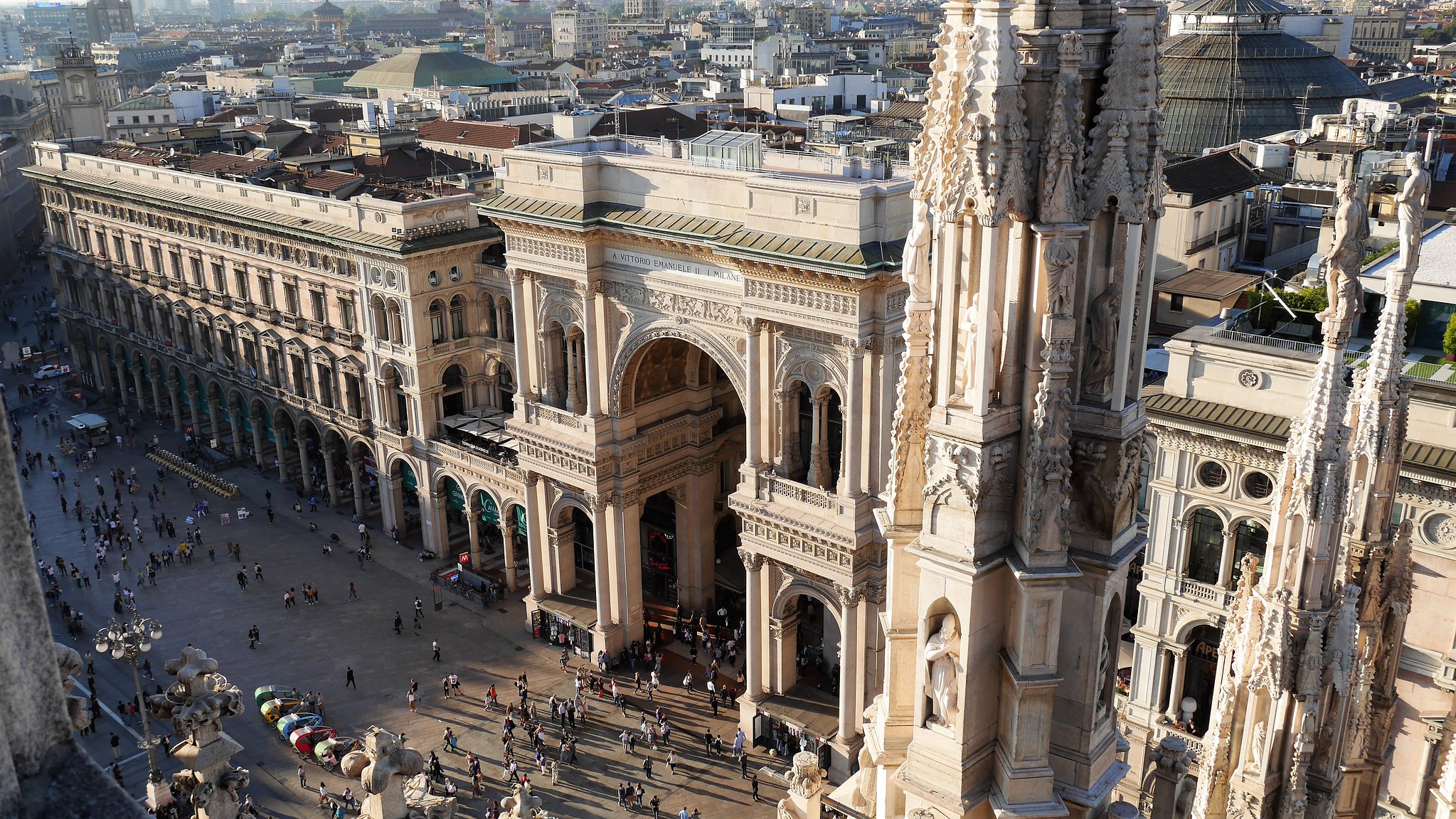 Milan is always one step ahead: a laboratory of artistic experiments and a building site for social behavior that is continuously changing. City full of contradictions, ancient and modern, trends and counter-trends, fashion and underground, middle class and working class, but always simply “cool”.

From the ancient Basilica of Sant’Ambrogio to the huge, majestic Duomo: the greatest symbols of religion in Milan:

The Duomo
The most outstanding example of Gothic-Lombard architecture, the Duomo dates back to 1300. It was built on the wishes of Gian Galeazzo Visconti. This imposing religious building, second only to St Peter’s Cathedral in Rome, houses almost 3500 statues that are spread over an area of almost 12,000 square meters. The tallest spire, which has the famous “Madonnina” on top of it, is 108 meters high. The statue of the Virgin Mary, the “Madonnina”, is covered in 3900 pieces of gold leaf.

Basilica of Sant'Ambrogio
This is the symbol of Milan’s religiousness. It was built in 379 A.D. in the Romanesque-Lombard style, and was consecrated by the famous Bishop Ambrogio, who lent his name to the Ambrosian Church. Inside there are valuable artifacts and works of art that tell the story of about 1600 years of Milan’s history.

Basilica of Sant' Eustorgio
A wonderful medieval religious building that was built at the beginning of the fourth century on the wishes of the Bishop Eustorgio who brought the remains of the wise kings here from Constantinople, that can still be seen in the Chapel bearing their name today. Basilica of San Lorenzo MaggioreThis wonderful basilica, located opposite the Roman columns that are the only remains of a third-century temple, includes many different architectural styles, due to the various renovations that the building has undergone. The main elements are Paleo-christian (for example the mosaics) but other more recent styles also stand out, including ones from 1600 (the dome) to 1800 (the façade).

Santa Maria delle Grazie
This church was built in the second half of the fifteenth century. It was only completed years later by “il Bramante” on the wishes of Ludovico il Moro. The famous architect designed the wonderful apse, the cloisters and the old sacristy. Leonardo da Vinci painted “The Last Supper” in the refectory, which is one of the most famous works of art ever painted.

Buildings and monuments that bear witness to the history of this city, the economic and cultural center of Italy.

Castello Sforzesco
The original center dates back to 1450, which was built on the wishes of the Duke Francesco Sforza. Over the centuries, the castle has undergone various changes, also due to the particular ups and downs that have seriously affected the structure. At the end of the 19th century, a major renovation was made on the whole building. Castello Sforzesco is a majestic building. Inside it has wonderful interior courtyards, built in Gothic-Renaissance style and incredible halls, designed by Leonardo, and frescos painted by master painters such as Bramante, who were commissioned by the court of Ludovico il Moro. The Castle now hosts important art exhibitions.

The Monumental Cemetery
This great cemetery was built around 1860, in a Lombard style and some obviously Byzantine shapes. Among the statues, chapels and other works of art, we can find the graves of some of the most famous people from Italian and European culture, such as Alessandro Manzoni, Salvatore Quasimodo, Eugenio Montale and Maria Callas.

Royal Palace
The Royal Palace, in Piazza Duomo, is a very old building that dates back to 1100 and which has been home to the most powerful men in Milan over the centuries, from the Viscontis to the Sforza family, the Spanish governors and Austrian rulers. Several temporary art exhibitions are held inside the building today.

Arco della pace
In the middle of Piazza Sempione there is this huge monument 25 meters high, that dates back to Napoleonic era. Arco della Pace is built in Neoclassical style, and is decorated with marble sculpture and Corinthian columns, and on the top there is a charming bronze “Sestiga”, a chariot drawn by six horses.

La Scala Theater
A Temple to Opera music, built at the end of the 1700s over the remains of the Church of Santa Maria della Scala, from which the theater then took its name. Some of the greatest names in opera have made their debuts in this theater: Rossini, Donizetti, Bellini, Puccini and, in 1839, Giuseppe Verdi, who moved to the Grand Hotel in Milan on that date where he continued to live until he died. The La Scala Theater, famous worldwide, stands on one side of the beautiful square that carries the same name. In the center of the square there is a monument to Leonardo da Vinci and on the other side there is the wonderful Palazzo Marini.

San Lorenzo Roman Columns
This is the only monument that dates back to the Roman era, which has managed to survive up to the present day. These sixteen columns that stand opposite the Basilica of San Lorenzo are all that remains of an ancient Roman temple, that probably dates back to the 2nd century.

Villa Belgiojoso Bonaparte
Also called Villa Reale, designed by architect Leopoldo Pollack, a student of Piermarini, and built between 1790 and 1796, Villa Belgiojoso Bonaparte is one Europe's greatest examples of neoclassical architecture. The interior is characterized by vast halls adorned with magnificent stucco and decorations, set in refined, delicate colors. The fresco in the lunch room, "Parnaso", a masterpiece by Andrea Appiani, is beautiful. The sumptuous exterior is framed by a splendid English garden. The villa is home to the 19th Century Museum (GAM – Gallery of Modern Art), and the PAC – Pavilion of Contemporary Art – is located in the garden.

Discovering the most romantic, attractive side of this city: from the picturesque views of the Navigli to the green oases in the center of Milan…

Navigli
The origins of the Navigli date back to about 1100, but this stretch of water was only made navigable from the Ticino to the center of Milan at the end of the 14th century, to help transport the marble that was needed to build the Duomo. The Milan Wharf, that was an important commercial port for river transport for many centuries, was still working up to the end of the Second World War, and then closed permanently in 1979. Today the Naviglio Grande and the Naviglio Pavese (that connects Milan to Pavia) make up one of the most charming places in Milan, with the old, typical banister houses, antique shops and hundreds of clubs standing on each side, that are invade the banks of the rivers from April to September with their open-air tables.

Rho – Pero Fair
A masterpiece of contemporary architecture designed by Italian architect Massimiliano Fuksas, Fieramilano is the largest exposition space in Europe. Rho – Pero, with its 345,000 square meters, excellent services, the metro that goes directly inside the area, innovative design, avant-garde materials and technology, is one of the most important fairgrounds in the world. It will be the exposition space for Expo 2015.

Via Tortona
It is one of the must-see streets in Milan, and the whole area around Via Tortona, which goes from Naviglio Grande to Via Solari and Porta Genova, is not to be missed.

The factory and artisan wasteland has today become the center of creative activity, ranging from photography and design studios to theater workshops and cultural foundations. The stars of Fuori Salone, the open air Salone del Mobile event in Via Tortona and its surroundings are, just to name a few: Superstudio Più and Superstudio 13, where there are photography studios and where the shows take place during Fashion Week, the City of Cultures project by architect David Chipperfield, being designed in the former Ansaldo factory; the Arnaldo Pomodoro foundation, dedicated to the great contemporary sculptor in the former Riva & Calzoni office spaces.

Brera
This is one of the most exclusive and fashionable places in Milan, that has an atmosphere vaguely reminiscent of Paris, with its artists, open-air coffee shops and sophisticated boutiques.

It is full of wares for the home and handmade dresses that seem to be creations of sculptors and not dressmakers. This area, that could be described as “luxury Bohemian” includes Via Brera, Via Solferino, Via Pontaccio, Corso Garibaldi and Corso Como. Alongside it there are many eighteenth century palaces including Palazzo Brera at number 28 Corso Como that houses the famous Pinacoteca.

Parco Sempione
This park stands behind Castello Sforzesco. It is huge and fascinating with its lakes, meadows and little bridges. It is the ideal place to spend a Sunday afternoon in the fresh air. The Park is home to monuments such as the Arena Napoleonica, the Tower designed by Giò Ponti and the Triennale di Milano.

Galleria Vittorio Emanuele
This was built around 1870 and is called the “salotto di Milano” (The Milan Lounge): If you walk along its cross-shaped "arms", topped by the glass and iron structure, you can see old coffee-shops, restaurants, boutiques and historical bookshops.

Piazza Mercanti
This characteristic square near the Duomo is surrounded by very interesting historical buildings that represent Milanese culture from the middle ages to the seventeenth century. These include Palazzo della Ragione that dates back to 1200, the Loggia degli Osii, the seventeeth century Palazzo delle Scuole Palatine and Palazzo dei Giureconsulti that stands at the top of Via Mercanti.

A day in Milan
Nozio.com has prepared a special itinerary, designed for those of you who do not have much time to hand, but who want to visit this city, that is so full of cultural and social stimulus. Our 24-hour itinerary includes an evening for discovering the Milanese night life, therefore we recommend that you book at least one night in one of Milan’s many hotels.