One of the most important towns of the Levante Riviera is Santa Margherita, an elegant international tourist destination with a unique atmosphere. Nestling around the port, its special charm lies in the unusual mix of nautical and Belle Epoque styles. The town had already developed by the Middle Ages, but only began to thrive in the 17th century, when the Genoese nobility built beautiful villas there. In the 19th century it began to attract visitors from all over Europe. Today the town has many hotels and seaside facilities. There is a wide variety of sports on offer, with numerous boat-hiring facilities, a sailing club and several diving centres.

Places to see:
Don't miss Villa Durazzo Centurione, built at the end of the 16th century and surrounded by spectacular Italian gardens. The baroque Santa Margherita di Antiochia Basilica is also worth a visit, which houses numerous works of Genoese artists. We recommend a trip to the Bay of Paraggi, with the only sandy beach in the area, and a spectacular variety of sea fauna and a wreck dating back to 1917.

Camogli is one of the best kept secrets of the Riviera of Liguria. Not having a large parking lot like the one at Portofino has saved the town from being invaded by mass tourism and, although events like the fish festival attract thousands of visitors, Camogli remains an authentic fishing village, with a truly enduring seafaring tradition.
The origins of its name got lost somewhere between logic and legend.
The first rendition into modern Italian, "le case delle mogli (the houses of the wives)," seems to refer to the fishermen's wives, who stayed home while their husbands were away at sea to earn a living.
Camogli might also mean something in the Genoese expression "Cà a muggi" (cluster of homes), an expression used to describe the area's multicolored homes, traditionally set against one another.
Although the origin of its name remains uncertain, the town's seafaring tradition is deeply rooted in the local culture, so much as to have earned the town the nickname of City of the Thousand White Sailing Ships to describe its ability to gather a large fleet and train an extensive number of naval captains and officers. Still today, the Christopher Columbus Nautical Institute produces many Italian naval officers.
After taking a leisurely stroll along the area's hills and the Sea of Tigullio, it will be easy to give into Camogli's clean seawater, where you will finally enjoy all you had admired while strolling along the town's welcoming gentle trails.
The entire area is part of a marine environmental preserve, where no environmental detail is overlooked to ensure that this purely Italian locale is kept in pristine conditions.

During the Middle Ages it was an important stronghold for the Genoese against the powerful Fieschi fiefdom, based in nearby Lavagna. Chiavari is today an elegant but modest town that lives off trade and craftwork (its chairs are renowned) and becomes a thriving holiday destination in summer, thanks also to its modern leisure port.

Places to see:
The ancient centre distinguishes itself from others in the Tigullio area for its neoclassical and 18th century architecture. The heart of Chiavari is Via Martiri della Liberazione (the straight "carruggio", or alley) with its porticos and host of shops. Don't miss the 17th century cathedral of Nostra Signora dell'Orto, with plenty of works of art. Wander among the beautiful palazzos and churches in the centre to Palazzo Rocca, home to the Chiavari botanical park. The park is divided into different areas and has been enhanced with caves, lakes and bridges.

A slight detour will take you to Cogorno and the Fieschi Basilica. It is one of the most important medieval monuments in Liguria, built in the 13th century by request of Pope Innocent IV, a member of the Fieschi family. Near the basilica are the medieval palazzo of the Earls of Fieschi and the remains of a 16th century house.

Portofino and the Tigullio Gulf are symbols representing Italy throughout the world. The coast is a sequence of fashionable resorts with their marinas, pastel-coloured houses, first-rate sports facilities and the seductive atmosphere of the Dolce Vita.But perhaps the most striking thing for the traveller is the beauty of the seascapes, with some of the most celebrated views in Italy, suspended between the intense blue of the sea and the green mountains.

In Tigullio tourists can fulfil a wealth of pleasures: sea and sports fans have access to windsurfing facilities, sailing, tennis, golf, hiking, splendid seabeds, and plenty of beach facilities. Take a relaxing walk through the unique historical coastal town centres, stopping at fashionable boutiques and craft shops, or indulge yourself in the wonders of Ligurian art, landscape and gastronomy. 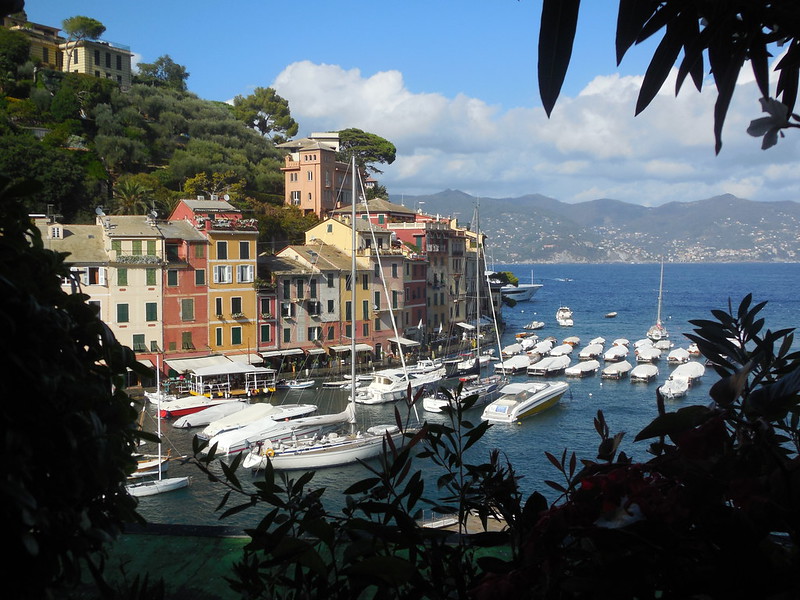 In a tiny creek, out of sight and almost inaccessible, is hidden an ancient fishing village, that has become an internationally renowned symbol. Until the 19th century, Portofino was a fishing village, the bay was a well-known safe haven for ships, and the promontory served as an outpost for coastal sightings. At the end of the 19th century, all over Europe, the middle classes and aristocracy began to choose this beautiful place to build their summer residences. Now, since the 1950s, Portofino has received big Hollywood names, great artists, politicians and entrepreneurs, making it famous all over the world.

Places to see:
the town square, symbol of Portofino, with its coloured houses and the marina with its fairytale yachts. The church of Saint Martin in the town centre is also worth a visit. Going up towards the promontory you come to the church and castle of Saint George, and further along the way you can see Brown Castle, immersed in magnificent gardens. All around, dozens of dream villas are dotted among the olive trees. For nature lovers, the ideal excursion is through the Portofino Natural Park, which provides a network of paths heading towards the mountain or halfway down the coast, with breathtaking views from the promontory.

For scuba divers, the reef is a natural paradise. This is the heart of the Protected Marine Area of Portofino, with its underwater cliffs and Posidonia beds. The park is the territory of red coral, which has found ideal conditions to develop. Scuba divers can also visit the wreckage of the Mohawk Deer and the Genova.

Rapallo is the largest town on the Levante Riviera, although it is not as well-known as nearby Portofino and Santa Margherita. The town has the typical aristocratic quality of the Riviera, seen in the villas and large hotels built from the 19th century. The oldest part of the centre has held on to its characteristic maritime feel, with steep narrow alleys buzzing with shops and cafes.Today Rapallo is an international tourist centre, with beautiful beaches, stylish hotels, conference centres, two leisure ports, an 18-hole golf course and numerous sports facilities.

Places to see:
The Castle overlooking the sea, built by the Genoese in 1550 is definitely worth a visit, so too are the churches of San Gervasio and San Protasio. Renowned for its lace, Rapallo has opened the Museum of Lace with over 1400 pieces of rare and precious antique lacework on display.
From Rapallo, we recommend a trip to the Montallegro Sanctuary, an important place of prayer. The sanctuary stands 600 metres above the sea and provides a magnificent view of the Gulf. Rapallo can be reached by cable car or on foot (1 hour hike).

One of the most photographed views of the Riviera: two bays separated by an isthmus bearing the ancient town of Sestri. Not much is left to testify to Sestris ancient history, but the town certainly merits a visit by anyone willing to be enchanted by the poetry of its setting and its two bays: the Bay of Fables, with modern seaside facilities, and the smaller Bay of Silence, so named by the famous fairy tale writer, Hans Christian Andersen. On the neck of land that separates the two bays rises the 12th century church of Saint Nicholas, while other historical villas around the town have been converted into hotels.

A great number of water sports can be enjoyed on Sestri's beaches, from sailing to windsurfing, swimming to diving. The inland is great for hiking or mountain bike excursions. 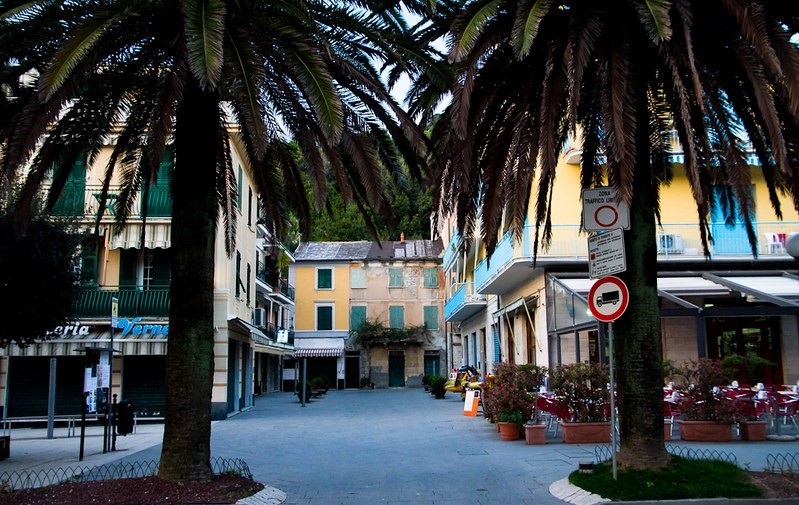 A tiny town set between two promontories, suspended between the intense blue of the sea and the lush green mountains. The atmosphere is peaceful and perfect for quiet contemplation of the wondrous landscape. The village is flanked on either side by two castles: the 12th century fortress of Monleone and the renaissance Villafranca Castle, open to the public. In the middle lies the characteristic fishermen's village, with its narrow streets and slate roofs. You can browse around Santa Croce church, which dates back to the 11th century.

Moneglia has a beautiful beach with various facilities where it is also possible to hire boats. A diving centre is also available for immersions along the beautiful cliffs. 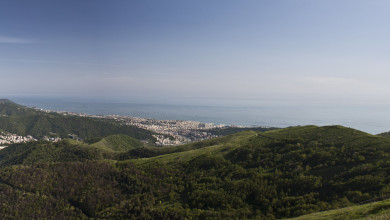 Genoa: surroundings
Here we suggest some two day-trip itineraries for exploring the immediate surroundings of Genoa. At the end of your trip, you can make a reservation in a Genoese hotel of your liking, and enjoy a real Genoese evening marked by good food and the joy of being alive, without having to worry about getting back to the place you started from.
Itineraries 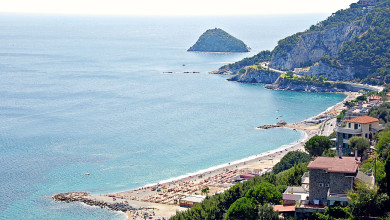 The Riviera delle Palme
This itinerary takes you southwest to explore the Riviera delle Palme (Palm Riviera), a long coastline measuring over 100 kilometers, extending west from Genoa out to Alassio. For several decades, this tract of coastline has been a tourist center for sunbathing and swimming; the consistently mild climate makes it enjoyable to visit this area even out of season, thereby avoiding the summer crowds.
Food 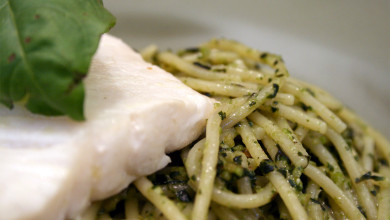