Turin, the history of the first capital of Italy

The first capital of Italy and seat of the first Italian Parliament, Turin's ancient history dates back to the year 27 BC, when Julius Caesar founded Augusta Taurinorum.

Solid and well-organized, bolstered by typically imperial grid with perpendicularly intersected streets, the city experienced the violent invasion of the Lombards and various others until it became an autonomous territory around the year 1000.

Ruled by the bishops that transformed it into a true papal state, the city broke free of the church in 1236, thanks to the support of wealthy traders, bankers and land owners. Piazza Palazzo di Città, near the market, is the heart of their economic and political power in the Historic States of Italy.

In 1280, the Savoys gained control. The powerful European dynasty, part of the Kingdom of Burgundy, ended the state experience and quickly transformed Turin into an important center. These years witnessed the birth of the University and future administrative and economic seats of the Duchy of Savoy.

With the decline of Chambery, the original Savoyard capital, Turin gained further importance until overtaking it after the treaty of Chateau-Cambresis in 1563. Emmanuel Philibert, valorous warrior prince, immediately fortified the Citadel and transformed the ancient Palazzo del Vescovo into the current Royal Palace where he set up court.

The Savoy family's reign contributed to expanding and embellishing Turin with the Nuova Galleria, Regio Parco and Mirafiori. The city's astonishing growth was suddenly brought to a halt with the onset of the plague in 1630 and with the intensification of conflicts with the French neighbors.With Charles Emmanuel II on the throne (1663), Turin to advantage of the peaceful period to start building the Venaria Reale and leave room for the brilliant genius of architect Guarino Guarini, to whom are attributed the magnificent Savoia-Carignano Palace, the chapel of the Shroud of Turin and the San Lorenzo church.

Besieged by the French during the War of the Spanish Succession, Turin was saved in 1706 by Victor Amadeus and cousin Eugene of Savoy, one of the eighteenth century's most valorous generals. The period witnessed Pietro Micca's heroic gesture, sacrificing his life in an explosion that destroyed one of the underground tunnels to the Citadel, thus thwarting the French attack. One of the city's most beautiful streets is named after.

The Treaty of Utrecht ended the war in 1713, transforming the Duchy into the Kingdom of Sardinia. This was the era of Victor Amadeus II and the fantastic works of Filippo Juvarra, Baroque Italian genius, architect of the Basilica di Superga and Carmine Church, military buildings and Stupinigi hunting residence.

After the short Napoleonic reign - when the curtain walls and ancient Piazza Castello gallery were destroyed and all church properties seized by the French - The 1815 Congress of Vienna returned Turin to Victor Emmanuel I of Savoy.

When the Restoration began, the city almost immediately experienced the first Carbonari and Mazziniani revolts, able to sway the political scene and aggravate the conflict with the Austrian Empire. Thus the Risorgimento began, in whose wave the Savoy dynasty, Cavour's clever diplomacy and the heroic Giuseppe Garibaldi succeeded in unifying Italy in 1861 with Turin as its capital for a short period of time.

Moving the country's capital first to Florence and then to Rome in 1870, Turin lost its status, governmental bureaucracy and consequent income. Only the construction of factories and workshops saved the population from deep economic crisis in this period. The city's staunch support of industrial growth, the General Expo at Valentino (1884) and the foundation of FIAT and the film industry all helped Turin play a leading role at the dawn of the twentieth century.

At least until the depression in the aftermath of World War I, the city progressively changed into a modern industrial center with constant population and production growth. Fascism's initial vivacity and resourcefulness in the 1920's, while intensifying social conflicts between government and workers, was beneficial to FIAT's coffers, attracting increasingly growing numbers of Venetian and Southern immigrants to Turin.

It was immigration that characterized life in Turin immediately following World War II and the harsh months spent freeing the city of Nazi-fascism. It caused some significant structural changes with the inevitable birth of entire housing project districts to house the mass of new FIAT, Lancia and Olivetti workers.

Having become one of the leading industrial cities in Europe with population over one million, Turin assimilated the substantial social changes and flourished under the economic boom in the 1960's. Later, the city suffered FIAT's first crisis due to fuel price hikes before being hit by the Hot Autumn union strikes, social conflicts and the consequent "Marcia dei 40.000".

Today's Turin is an elegant capital for events like the 2006 Winter Olympics, the "Salone del Gusto" and many other leading expos. Now multiethnic, it faces the difficulties of the much needed yet socially and economically challenging foreign immigration. 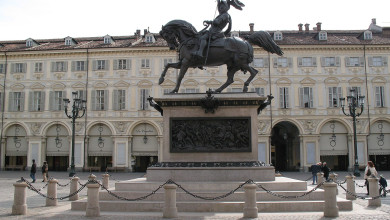 Turin and surroundings: itineraries for everyone
We'd like to suggest 5 possible tours in Turin, each interesting, pleasant and convenient, revealing a different side of the city.
Guides 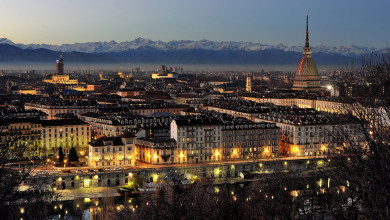 Turin: all the things to know
Turin owes its charm to both its aristocratic history as the first capital of Italy and its humble, disciplined and eager soul. Its austere rigor made it an excellent example exported throughout the world, from its automobile industry to its computer sector, from its culture to its cuisine.