A day in Milan

Milan, is not difficult to explore: it is often possible to walk from one interesting area to another, and in other cases we recommend you take the subway, that will let you reach your destination without getting your stuck in city traffic.

Our tour starts with discovering Milan from Piazza Duomo, where you can admire the Duomo, that is one of Milan’s most important symbols. Why don’t you go in and climb up to the roof: you will find yourself surrounded by spire and late-Gothic statues, admiring the sight of the city that spreads out before you.

From Piazza Duomo, go to the splendid Galleria Vittorio Emanuele: you can have breakfast here, in one of the elegant coffee-shops inside the Galleria. We recommend Zucca, the coffee shop favored by Verdi and Toscani, with its second-floor windows that look out onto the Duomo and the Galleria and its luxury Liberty-style furnishings in wrought iron, mahogany and mosaics.

After a refreshing breakfast, continue on your tour going through the Galleria and walk to Piazza della Scala, where you can see the famous Theater La Scala. If you are fond of theater costumes and sets, we recommend you visit the interesting Museum. Otherwise you can continue your journey. From Piazza della Scala, go on to the nearby Via Dante and walk along until you get to the majestic Castello Sforzesco. Behind the Castle, you can see Parco Sempione: if you don’t feel hungry yet, you can work up an appetite by walking through the park. Once you come out of the park, walking through the Arco della Pace, you have two possibilities: look for a restaurant in the area straightaway, or go on foot or by taxi to your next stop, the Cenacolo Vinciano in Corso Magenta, and have lunch there.

We recommend raw vegetables with Crescenza or Gorgonzola cheese to start with, followed by Risotto alla Milanese and then the traditional cutlet or a tasty pot roast.

The afternoon is dedicated to art: first stop: we suggest the Cenacolo Vinciano that Leonardo painted in the refectory in the Church of Santa Maria delle Grazie in Corso Magenta. After admiring this masterpiece, go on to the nearby Piazza Cadorna where you will find the subway to take you to the Pinacoteca di Brera picture gallery. Get off at Cairoli (1 stop) and continue on foot. After you have visited the wonderful Pinacoteca, spend a bit of time exploring Brera, one of the most charming areas of Milan.

For a real taste of the unique atmosphere of the Milan Dolce Vita you will have to go to the Navigli area. Take the subway and get off at Porta Genova. Once there, go along Via Vigevano up to the Wharf and start exploring the clubs that line the Navigli.
Between one aperitif and the next, you will have the change to eat a real meal, serving yourself from the rich buffets that are provided at happy hour. Continuing your evening into the night will be no problem: you will soon learn which is the cool new club that has just opened, or which live concerts are planned for the evening. Don’t give yourself a time limit: Milanese nights are truly unpredictable!

Milan is Heaven on Earth for shopping lovers. You can find the best of everything in this city, especially everything connected with fashion and design.
Milan has a wonderful history as a laboratory of creative ideas: The Polytechnic and the Accedemia di Brera have trained fashion designers and other designers who are famous worldwide. They exhibited their creations for the first time in Milan, often creating scandal and revolutionizing fashion with their own personal style, never going unobserved.

In this section, we will offer you a small selection of fashion designers born in Milan, or who started their careers here, contributing to the great name of Italian fashion in the world. 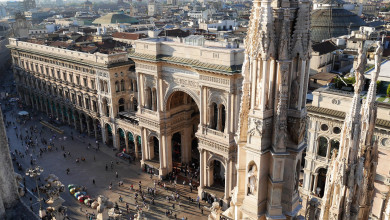 Milan: the best things to visit
Milan is always one step ahead: a laboratory of artistic experiments and a building site for social behavior that is continuously changing. City full of contradictions, ancient and modern, trends and counter-trends, fashion and underground, middle class and working class, but always simply “cool”.